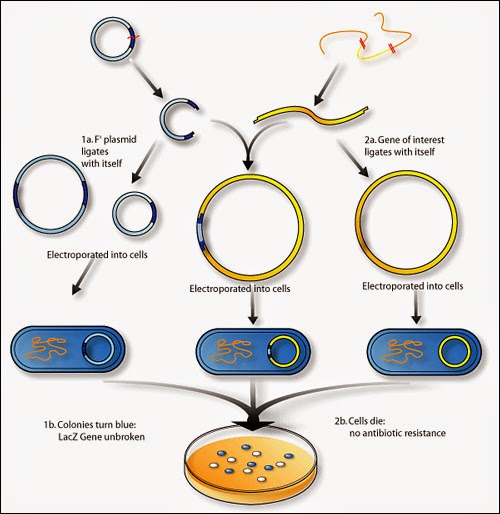 Recombinant DNA technology, joining together of DNA molecules from two different species that are inserted into a host organism to produce new genetic combinations that are of value to science, medicine, agriculture, and industry. Since the focus of all genetics is the gene, the fundamental goal of laboratory geneticists is to isolate, characterize, and manipulate genes. Although it is relatively easy to isolate a sample of DNA from a collection of cells, finding a specific gene within this DNA sample can be compared to finding a needle in a haystack. Consider the fact that each human cell contains approximately 2 metres (6 feet) of DNA. Therefore, a small tissue sample will contain many kilometres of DNA. However, recombinant DNA technology has made it possible to isolate one gene or any other segment of DNA, enabling researchers to determine its nucleotide sequence, study its transcripts, mutate it in highly specific ways, and reinsert the modified sequence into a living organism.

DNA Cloning
In biology a clone is a group of individual cells or organisms descended from one progenitor. This means that the members of a clone are genetically identical, because cell replication produces identical daughter cells each time. The use of the word clone has been extended to recombinant DNA technology, which has provided scientists with the ability to produce many copies of a single fragment of DNA, such as a gene, creating identical copies that constitute a DNA clone. In practice the procedure is carried out by inserting a DNA fragment into a small DNA molecule and then allowing this molecule to replicate inside a simple living cell such as a bacterium. The small replicating molecule is called a DNA vector (carrier). The most commonly used vectors are plasmids (circular DNA molecules that originated from bacteria), viruses, and yeast cells. Plasmids are not a part of the main cellular genome, but they can carry genes that provide the host cell with useful properties, such as drug resistance, mating ability, and toxin production. They are small enough to be conveniently manipulated experimentally, and, furthermore, they will carry extra DNA that is spliced into them.

Creating the clone
The steps in cloning are as follows. DNA is extracted from the organism under study and is cut into small fragments of a size suitable for cloning. Most often this is achieved by cleaving the DNA with a restriction enzyme. Restriction enzymes are extracted from several different species and strains of bacteria, in which they act as defense mechanisms against viruses. They can be thought of as “molecular scissors,” cutting the DNA at specific target sequences. The most useful restriction enzymes make staggered cuts; that is, they leave a single-stranded overhang at the site of cleavage. These overhangs are very useful in cloning because the nucleotides will pair with other overhangs made using the same restriction enzyme. So, if the donor DNA and the vector DNA are both cut with the same enzyme, there is a strong possibility that the donor fragments and the cut vector will splice together because of the complementary overhangs. The resulting molecule is called recombinant DNA. It is recombinant in the sense that it is composed of DNA from two different sources. Thus, it is a type of DNA that would be impossible naturally and is an artifact created by DNA technology.

Isolating the clone
In general, cloning is undertaken in order to obtain the clone of one particular gene or DNA sequence of interest. The next step after cloning, therefore, is to find and isolate that clone among other members of the library. If the library encompasses the whole genome of an organism, then somewhere within that library will be the desired clone. There are several ways of finding it, depending on the specific gene concerned. Most commonly, a cloned DNA segment that shows homology to the sought gene is used as a probe. For example, if a mouse gene has already been cloned, then that clone can be used to find the equivalent human clone from a human genomic library. Bacterial colonies constituting a library are grown in a collection of Petri dishes. Then a porous membrane is laid over the surface of each plate, and cells adhere to the membrane. The cells are ruptured, and DNA is separated into single strands—all on the membrane. The probe is also separated into single strands and labeled, often with radioactive phosphorus. A solution of the radioactive probe is then used to bathe the membrane. The single-stranded probe DNA will adhere only to the DNA of the clone that contains the equivalent gene. The membrane is dried and placed against a sheet of radiation-sensitive film, and somewhere on the films a black spot will appear, announcing the presence and location of the desired clone. The clone can then be retrieved from the original Petri dishes.

DNA sequencing
Once a segment of DNA has been cloned, its nucleotide sequence can be determined. The nucleotide sequence is the most fundamental level of knowledge of a gene or genome. It is the blueprint that contains the instructions for building an organism, and no understanding of genetic function or evolution could be complete without obtaining this information.

Uses
Knowledge of the sequence of a DNA segment has many uses, and some examples follow. First, it can be used to find genes, segments of DNA that code for a specific protein or phenotype. If a region of DNA has been sequenced, it can be screened for characteristic features of genes. For example, open reading frames (ORFs)—long sequences that begin with a start codon (three adjacent nucleotides; the sequence of a codon dictates amino acid production) and are uninterrupted by stop codons (except for one at their termination)—suggest a protein-coding region. Also, human genes are generally adjacent to so-called CpG islands—clusters of cytosine and guanine, two of the nucleotides that make up DNA. If a gene with a known phenotype (such as a disease gene in humans) is known to be in the chromosomal region sequenced, then unassigned genes in the region will become candidates for that function. Second, homologous DNA sequences of different organisms can be compared in order to plot evolutionary relationships both within and between species. Third, a gene sequence can be screened for functional regions. In order to determine the function of a gene, various domains can be identified that are common to proteins of similar function. For example, certain amino acid sequences within a gene are always found in proteins that span a cell membrane; such amino acid stretches are called transmembrane domains. If a transmembrane domain is found in a gene of unknown function, it suggests that the encoded protein is located in the cellular membrane. Other domains characterize DNA-binding proteins. Several public databases of DNA sequences are available for analysis by any interested individual.

Methods
The two basic sequencing approaches are the Maxam-Gilbert method, discovered by and named for American molecular biologists Allan M. Maxam and Walter Gilbert, and the Sanger method, discovered by English biochemist Frederick Sanger. In the most commonly used method, the Sanger method, DNA chains are synthesized on a template strand, but chain growth is stopped when one of four possible dideoxy nucleotides, which lack a 3′ hydroxyl group, is incorporated, thereby preventing the addition of another nucleotide. A population of nested, truncated DNA molecules results that represents each of the sites of that particular nucleotide in the template DNA. These molecules are separated in a procedure called electrophoresis, and the inferred nucleotide sequence is deduced using a computer.
Posted by FPGEETutor.com at 03:33