Microorganisms:
Microorganisms (Latin micro = small) are living beings so small (< 40 µm or 0.04 mm) that they are not visible by the naked eye. Microorganisms related to human health include certain bacteria, viruses, fungi and parasites.

Microorganisms can be, according to their characteristics, divided into several groups:

1. Bacteria
Bacteria are unicellular organisms, about few microns in size (1 micron (µm) = 1/1,000 of a millimetre), consisting of DNA, cytoplasm, structures needed for metabolism and reproduction, cell membrane, cell wall and capsule .Certain bacteria use flagella, tail-like appendages, to propel themselves.

Bacteria can be divided into several groups:

Certain bacteria can form endospores, a kind of encapsulated bunkers within a bacteria that enable vital parts of bacteria to survive in harsh conditions, like freezing or boiling water, dessication, lack of nutrients, etc. Some bacteria can survive weeks, and some millions of years in this form.
In the human body, bacteria usually cause localized infections, like pneumonia or skin infections. Bacterial infections can be diagnosed by growing a bacterial culture from a sample of infected body fluid (e.g. urine, blood), stool, discharge (e.g. sputum) or tissue (e.g. mucosal layer of the stomach). Most of bacterial infections can be successfully treated by anti-bacterial drugs – antibiotics.
Examples of bacteria pathogenic for a human are:

Viruses are simple microorganisms, containing only DNA or RNA molecule and capsule. They cannot survive outside the host for long periods, so they are mainly transmitted by blood-to-blood or stool-to-mouth route. In the human body, they have to invade the cells to multiply

Virus cycle: entry of herpes simplex virus (HSV) into the cell (on the left), multiplying within the cell and release (right) from the cell

Viruses usually cause systemic infections, affecting the whole body. Examples of viruses, pathogenic for a human:
Viruses can be diagnosed by finding specific antibodies in the sample of blood (serologic tests). Vaccination against several virus infections is possible; only few viral infections can be treated by anti-viral medications, though.

Fungi are widely present in the environment and also on the human skin, gut and vagina.
Fungi are subdivided on the basis of their life cycles, the presence or structure of their fruiting body and the arrangement of and type of spores (reproductive or distributional cells) they produce.
The three major groups of fungi are:
·         multicellular filamentous moulds
·         macroscopic filamentous fungi that form large  fruiting bodies. Sometimes the group is referred  to as ‘mushrooms’, but the mushroom is just the part of the fungus we see above ground which is also known as the fruiting body.
·         single celled microscopic yeasts

Human intestinal parasites are either one-cell organisms or intestinal worms that live in the small or large intestine and use the stool or blood from intestinal wall as a source of food.

Intestinal worms (helminths), like roundworms (hookworms), whipworms,  Ascaris andTrichinella), tapeworms and flukes, are few millimeters to several meters in size, they eat the bowel content or suck the blood from the intestinal wall and can cause about the same symptoms as one-cell parasites.

Microorganisms, like certain bacteria and yeasts, living on the human skin or in the nose, mouth, throat, small and large intestine and vagina, are part of the normal human flora; they prevent overgrowth of harmful microorganisms. Some of these microbes, when overgrow, may become pathogenic, though.

Pathogenic means capable of causing disease. An actual harmful effect of a microbe to the body depends on:

Posted by FPGEETutor.com at 20:53 No comments:

The nervous system has two major parts: the central nervous system (CNS) and the peripheral nervous system (PNS). The central system is the primary control center for the body and is composed of the brain and spinal cord. The peripheral system consists of a network of nerves that connects the rest of the body to the CNS.
The two systems work together to collect information from inside the body and from the environment outside it. The systems process the collected information and then dispatch instructions to the rest of the body, making it respond.
In most cases, the brain is the destination for information gathered by the rest of the nervous system. Once data arrives, the brain sorts and files it before sending out any necessary commands.
The brain is divided into many different sections, including the cerebrum and brain stem. These parts handle pieces of the brain’s overall workload, including storing and retrieving memory and making body movements smooth.
Although the brain is the control center, its job would not be possible without the spinal cord, which is the major conduit for information traveling between brain and body.
Peripheral system nerves branch from either the brain stem or the spinal cord. Each nerve is connected to a particular area of the torso or limbs and is responsible for communication to and from those regions.
The PNS can also be divided into smaller pieces: the somatic and autonomic systems. The somatic involves parts of the body a person can command at will, and the autonomic helps run involuntary functions such as pumping blood.
Information conveyed through the nervous system moves along networks of cells called neurons. These neurons can only send information one way. Those transmitting to the brain are sensory neurons; those that transmit from the brain are known as motor neurons.


The nervous system can suffer from a number of afflictions, including cancer. Other problems include multiple sclerosis, in which damaged nerves prevent signals from traveling along them, and meningitis, which causes an inflammation of the membranes surrounding the brain and spinal cord.
Posted by FPGEETutor.com at 22:22 No comments: 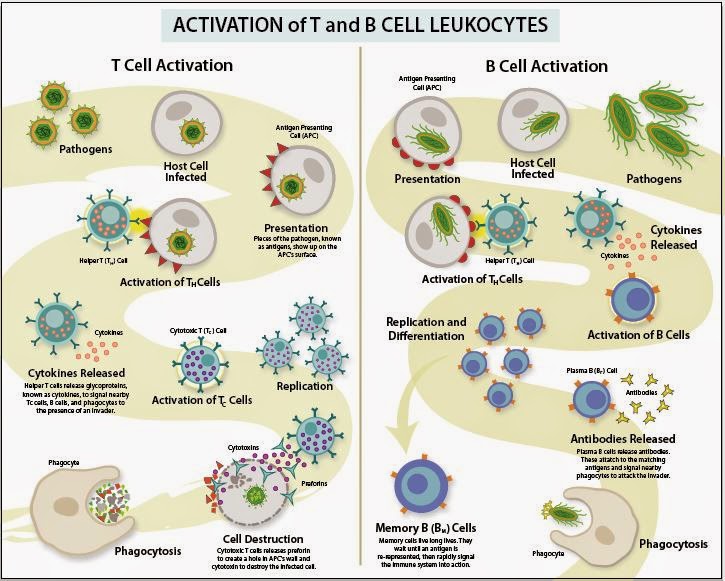 T helper cells play an essential role coordinating the activities of other parts of the immune system, including B cells, cytotoxic T cells, macrophages and other cells. The crucial nature of helper T cells in the normal immune response is demonstrated by the severe immune deficiency associated with the HIV-induced helper T cell depletion. To communicate with other cells, helper T cells express a range of cell surface molecules, a few of which are illustrated in this figure. Like all T cells, helper T cells express T cell receptors complexed with the CD3 proteins that are responsible for the recognition and response of the cell to specific antigens (see “T Cell Receptor Signaling Pathway”). CD4 is commonly used as a marker for helper T cells, in contrast to cytotoxic T cells, which express CD8. CD4 is used by HIV to gain cell entry, as well as the CCR5 chemokine receptor. Thy1 provides a more general cell surface antigen used to identify both T helper and cytotoxic T cells. CD28 provides a costimulatory signal in association with the activation of the T cell receptor complex by an antigen presenting cell that is required for the T cell to become activated (see “The Co-Stimulatory Signal during T-cell Activation” pathway). Adhesion molecules on the surface of T cells assist in their interaction with other cells. LFA-1 binds to its ligand ICAM-1 in a variety of cells and T cells themselves also express ICAM-1. The CD45 protein tyrosine phosphatase dephosphorylates factors in the pathways involved in B cells and T cells activation. Although CD45 is required for T cell receptor activation, exclusion of CD45 from the local membrane region near the T cell receptor appears important for efficient T cell activation. Helper T cells can be subdivided further into Th1 and Th2 cells, distinguished by their response to different antigens, differing cytokine expression and expression of different chemokine receptors (see “Selective expression of chemokine receptors during T-cell polarization”) CD2 is required for efficient helper T cell maturation and stimulates their differentiation, but does not select for a specific increase in Th1 or Th2 populations of cells.
Posted by FPGEETutor.com at 21:37 No comments:

Posted by FPGEETutor.com at 00:26 No comments: